The One Where Joey Loses His Insurance

Rachel prepares to move in with Ross. Ross is asked to give a lecture at NYU. Phoebe’s psychic tells her that she will die before the end of the week. Ross practices his lecture for the gang but it’s really boring. Joey’s SAG health insurance has lapsed due to his lack of work. Ross’s lecture goes well, without jokes or “naked chicks”. Joey gets a hernia working out for auditions. Rachel and Monica discover that Ross is interesting because he uses a British accent. Joey won’t go to the hospital and Phoebe’s psychic dies instead of her. Ross’s lawyer calls for him and Rachel talks to him, discovering that they’re still married. 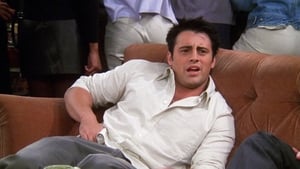