The One with the Soap Opera Party

Joey doesn’t tell the gang about his plans to throw a party on the roof of the building. He also hides the fact that he’s invited the “Days of Our Lives” cast, since the girls embarrass him when they meet stars. Rachel discovers the truth about the party and soon, everybody knows (except for Chandler). Ross meets a new colleague and, instantly attracted to her, invites her to the party. Rachel and Monica go the party and act like crazed fans while Ross is intimidated by Charlie’s former boyfriends. Meanwhile, Chandler is at a play alone. At the end of the party, Rachel is looking for Joey and Ross is looking for Charlie, and they find Joey and Charlie kissing. 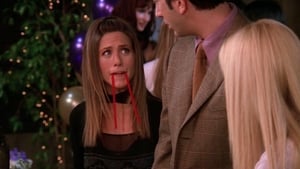